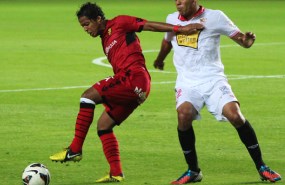 The past few weeks have been a period of mixed emotions for supporters of the Mexican national team. The long awaited meeting between coach Miguel Herrera and in-form Real Sociedad forward Carlos Vela ended in disappointment as Vela confirmed that he does not wish to be considered for national team selection for this summer's World Cup. On the positive end of spectrum, Giovani dos Santos has continued his excellent form for Villarreal.

Of players who have played at least the half of the total minutes in La Liga this season, Dos Santos ranks 10th in goal contribution (non-penalty goals + assists), providing 0.90 goals per 90 minutes. He is the second non-Barcelona or Real Madrid player in the ranking. This is a marked improvement on his goal contribution for Mallorca last season, where he was involved in 0.49 goals per 90 minutes.

At Villarreal, Dos Santos has received trust and playing time from coach Marcelino Garcia Toral. Last season with Mallorca was the first time he had started more than 10 league matches in a season. Four years in the wilderness at Tottenham Hotspur – where Harry Redknapp once quipped that if "he could pass a nightclub as well as he can pass a ball, he would be all right" – punctuated by loan spells of varying success at Ipswich, Galatasaray and Racing Santander, stalled his career at a pivotal moment. He is making up for lost time at Villarreal.

Marcelino has instituted a swift, attacking style of play that has quickened the tempo of Villarreal's traditional possession-based approach. There is more purpose; less attempt to use possession as a means of control. Unsurprisingly, it is the forwards who have benefited most, with Dos Santos, Ikechukwu Uche and, with significantly less minutes to his name, Jeremy Perbet all achieving a goal contribution of 0.90 or more goals per 90 minutes.

For perhaps the first time since he left Barcelona at 19, Dos Santos has a place he can call home. Marcelino – who was also his coach during his loan spell at Racing Santander – has consistently sung his praises and emphasised his importance to the team. Dos Santos has responded with a string of superb performances, moving intelligently across the forward line, taking on defenders and regularly providing a quality pass or finish in the final third. Blessed with celerity of body and mind, he has been a constant menace to opposing defences.

Herrera will hope to draw similar performances from him in the green of Mexico this summer. Dos Santos has previously complained that he has been played out of position for the national team, finding himself stationed on the right wing rather than in his favoured central forward position. That should not be a problem under Herrera, whose Ricardo La Volpe-predicated 3-5-2 should allow Dos Santos to flourish as one of two strikers. He is yet to be called up by the former Club America coach, who has favoured domestic-based players in each of his two matches in charge to date, but is certain to be a part of Mexico's World Cup squad.

Like Dos Santos, Vela has thrived since leaving north London, scoring 35 goals in two and a half seasons at Real Sociedad, initially on loan from Arsenal and then following a permanent €3.8m transfer in the summer of 2012. He has dovetailed superbly with the young French forward Antoine Griezmann and the duo fired Sociedad to a top four finish last season. His goal contribution of 0.87 goals per 90 minutes is the 12th best in Spain in the current campaign and he is one of the league’s top providers of accurate through balls.

The prospect of an in-form Dos Santos and Vela rekindling their successful Under-17 partnership at full international level was certainly a tantalising one, but Vela's longstanding issues with the Mexican Football Federation (FMF) led to his decision to turn down the opportunity to play in Brazil. It is a shame for all involved, but Vela has been consistent in his refusal of call-ups over the last three years and there are clearly deep-seated issues that he feels strongly enough about to continue to decline the federation's invitations.

It will, then, just be Dos Santos of Mexico's La Liga standouts who will represent the country in Brazil this summer. He has often been a talismanic figure for the national team, scoring in the final of each of their last two Gold Cup triumphs and will again be tasked with leading their attack. With Javier Hernandez, Alan Pulido and Oribe Peralta vying for a place alongside him, Mexico still have a decent amount of quality in the final third, but it is impossible not to wonder how much more potent their attack would be with Vela there as his partner.