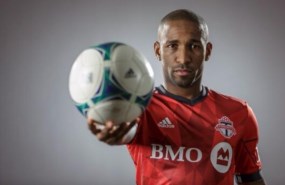 Afflicted by the sports curse that has derailed all of the city’s sports teams, Toronto FC have deservedly been saddled with the MLS “also rans” tag over the past few years. A record of just 11 wins over the past two seasons made the team a laughing stock, especially after the talk of Total Football under former boss Aron Winter.

But all the pain has been swept away by an off-season packed with big name signings and unbridled optimism. The new MLS season is just around the corner – and Toronto FC are one of the teams to watch.

A willingness to spend big money (and absorb short-term financial losses) in a bid to put a winning product on the field has been refreshing for supporters who have endured some miserable spells and are yet to experience playoff action during the club’s seven-year MLS existence.

Jermain Defoe, though just one of several new faces, is the headline signing that put Toronto FC back on the map. The England striker will really move the needle for Nelsen’s side and still has age on his side. The 31-year-old's decision to take his talents to the MLS is a big coup for the league, given that he is one of very few European stars to land in North America for more than just his twilight years in the game. So long as he stays fit and retains his eye for goal, he is the odds on favourite to finish as the MLS’ top scorer this season, putting Toronto FC into the MLS Cup conversation.

But this will be no “one man show” and even Defoe’s arrival was paired with that of Michael Bradley, the US international midfielder who has enjoyed stints at Borussia Monchengladbach and Roma. Bradley, still just 26, will add steel to the Toronto FC midfield and should quickly establish himself as a key supply line for Defoe. Gilberto, who caught the eye with a prolific run of goals in Brazil, will likely partner Defoe in attack, instantly giving Nelsen’s the league’s most explosive strikeforce. Returning forward Dwayne De Rosario, a Canadian international, knows the MLS inside out and will be a positive influence in the dressing room.

The Reds have their defensive frailties covered too, with Nelsen cashing in on contacts back in England to clinch loan deals for Blackburn defender Bradley Orr and QPR goalkeeper Julio Cesar, who is eager to impress and earn a place in the Brazilian World Cup squad this summer.

Of course, there are countless examples of how long it can take for a team to develop the necessary chemistry after a frantic off-season. And Nelsen has already received clear reminders that nothing will come easy as Toronto FC prepare for their first league game against the Seattle Sounders on 15th March (while most of the MLS teams kick off a week earlier, Toronto FC have an opening week bye).

"Just because you make some changes, it's not like a light switch. It does take time", the New Zealander explained. "That's the beauty of sport. But in saying that we fully expect to get where we want to be. And if you think the expectations are high outside, they're probably higher inside. But we know it's hard and we know it's a journey to get to."

Pre-season has been a challenge, with Defoe still yet to land in Toronto and Bradley, Gilberto and Orr among those dealing with injuries. The bonding trip to Florida produced mixed results on the pitch and confirmed that, while Toronto FC have the glamour of star signings, squad depth could become an issue. Nonetheless, there will be no excuses if Toronto FC do not press home their advantage.

And so, while the Maple Leafs and Raptors remain bigger business, MLSE has given Toronto FC the first chance to chase silverware under the Leiweke regime. It is a major statement about the sport’s rise. Toronto FC are well placed for an instant turnaround and, as the 2014 MLS season begins, their progress is one big storyline to keep a close eye on. As for the supposed pressure on his players, Nelsen is not buying into that.

“I don’t have to tell them anything, they love it”, said Nelsen said Tuesday. “They thrive under it. This is what professional football is all about.”