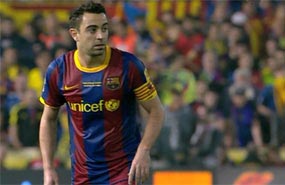 It is that time of year again. Real Madrid welcome Barcelona for the second league Clasico of the season, with ten fixtures to go before the end of the 2013/14 league term. Los Blancos, vying for a first league title since the 2011/12 campaign, are table leaders with 70 points, while the Blaugrana sit four points behind them in third place, behind Atletico Madrid.

Mathematically, the outcome of this game will not determine the identity of the new Spanish champions, as there will still be a potential 27 more points to be earned from both sides. Realistically, a win for Barcelona at the Santiago Bernabeu will bring them strongly back into the title fray, while a triumph for Real Madrid will all but end the Blaugrana’s hopes of keeping the domestic crown in their cabinet for a second successive season.

How things have changed between this fixture and the corresponding one that was played on 26th October. On that day, it was the Cules who were ahead of Los Merengues, with 25 points as opposed to Real Madrid’s 22, and their comprehensive win at the Camp Nou expanded this to six points. However, a serious surge after January on the part of Carlo Ancelotti’s men has seen them top La Liga, having amassed a whopping 29 points out of a possible 33, as opposed to Gerardo Martino’s players who could only muster 20 points in the same timeframe.

2014 has been a great year so far for Real Madrid, with Jese Rodriguez’s season-ending injury against Schalke a few days ago being the only dark cloud in what have been sunny skies in the Spanish capital. From defence to attack, every one of Ancelotti’s first-eleven has been wonderful, largely thanks to the effectiveness of the 4-3-3 formation he has adopted: Diego Lopez continues to impress in goal, while Pepe has won back his place in the team and is back to being the defensive beast of yesteryears. In midfield, Xabi Alonso and Luka Modric’s understanding have made things a lot easier, while the attacking triumvirate of Karim Benzema, Gareth Bale and Cristiano Ronaldo – now nicknamed the “BBC” – has been outstanding, even more so with Benzema’s return to life and more importantly, to the scoresheet on a regular basis.

On the other end of the spectrum, Barcelona’s suffering has allowed Real Madrid to push their way to the top of the league table. They have only managed a single win on the road since the turn of 2014, a 4-1 win over Sevilla on 2nd February, and have fallen prey to the likes of Real Sociedad and Real Valladolid, in matches the four-time Champions League winners should have in reality won.

Martino’s detractors have accused him of preferring substance over style and adopting a more pragmatic approach to games. But even greater than this, the club as a whole suffered changes over the past few months, with the resignation of president Sandro Rosell due to the continuing mystery surrounding Neymar’s transfer from Santos last summer.

Another major change next to this is the news that Carles Puyol and Victor Valdes will leave the club at the end of season. With the departure of Puyol and Valdes, the club will have lost their captain and one of their vice-captains in the same time, and it will be certainly interesting to see who will fill the duo’s big shoes. At 35 years of age – turning 36 next April – Puyol’s legs are not what they used to be, but there are few men out there that can take his place and play with the same commanding, lion-hearted spirit that the skipper does. As for Valdes, it is a real shame to see him leave as he is currently enjoying what is undoubtedly his finest season as a Blaugrana member.

On the field, Lionel Messi is not the same man he was in past seasons, but the Argentine’s hat-trick last weekend in the 7-0 drubbing of Osasuna is the clearest indication that he is ready for the upcoming Clasico showdown. Up-front, he will be backed up by Neymar and Alexis Sanchez, fellow South Americans who are also showing their colours in recent games.

In midfield, Andres Iniesta’s value cannot be overlooked, and his partner in crime Xavi will be full of energy. The duo are still able to dictate a game and their personal battle with Modric and Alonso will have a great say as to who the victor of the Clasico will be.

On the cover, it might be just another three points, but deep inside, this match is a must-win for both clubs. A win for Real Madrid will get them even closer to their dreams, crushing Barcelona’s in the meantime. Even more important for Los Blancos is the fact that Atletico Madrid are just three points behind and will be hoping that their cross-town rivals choke in this fixture, while Barcelona realise that a loss will see the gap widen between them and the Rojiblancos in this very fiery three-way dance.

With a Copa del Rey final to be played between Real Madrid and Barcelona on 16th April, the winner of this Clasico will earn bragging rights going into their rematch of the 2011 edition. And given how things are going in the Champions League for both clubs, it is very probable that they will meet on the continental front at some point.

This game is unlike any other, and like many times before, will be full of controversy that will enter Clasico history. And as in the past, both teams will be going to war and the outcome of this game will more likely than not decide the league’s outcome.