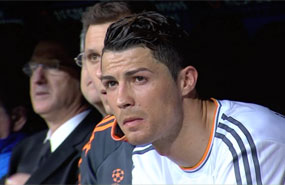 And at the twelfth attempt, Real Madrid have done it. Having unexpectedly brushed aside trophy holders and heavy favourites Bayern Munich to make their way into the Champions League final in Lisbon on 24th May, Los Blancos are finally in line to make their elusive dream of winning a tenth Champions League accolade a concrete reality. Given the way they played Die Roten in both legs of their semi-final encounter, final opponents Atletico Madrid must take note or risk enduring the same.

Ever since the sacking of popular coach and current Spain boss Vicente del Bosque in 2003 – despite winning La Liga and the Champions League twice in a four-year tenure – the Real Madrid hierarchy looked left, right and centre for a man to guide them to that magical “number 10” trophy. Eleven years later and Carlos Queiroz, Jose Antonio Camacho, Mariano Garcia Remon, Vanderlei Luxemburgo, Juan Ramon Lopez Caro, Fabio Capello, Bernd Schuster, Juande Ramos, Manuel Pellegrini and Jose Mourinho have all tried and all failed in their attempts.

Mourinho left the club last summer in unceremonious circumstances, and president Florentino Perez had to look elsewhere to find his man. In came Carlo Ancelotti, the man who guided AC Milan to two Champions League victories in 2003 and 2007 – as well as taking them to the final in 2005.

Fast forward eleven months and it seems that the decision to appoint Ancelotti has been Perez’s best since he took the helm of the club back in 2009. The Italian’s arrival quickly saw the diffusion of the tension left by the departing Mourinho. Most of the players were happy to be under a new regime as Ancelotti was quickly branded “the peacemaker” upon his introduction at the Santiago Bernabeu.

Eager to get the best out of his players, the former Paris Saint-Germain manager adopted a very efficient system, utilising the 4-3-3 formation to its best extent. Cristiano Ronaldo and €100m signing Gareth Bale thrived on the flanks, while Angel di Maria reinvented himself as a midfielder next to Luka Modric and Xabi Alonso.

But Los Merengues’ game did not end there. Realising that this formation allowed them to be exposed at the back, the Italian opted to surprise his opponents in matches where he understood winning the possession battle was particularly hard. As such, he fielded his team in a 4-4-2 formation in the Copa del Rey final against Barcelona and in both legs against Bayern Munich, to a very fruitful extent.

It is no coincidence that three of Real Madrid’s four goals against Bayern Munich at the Allianz Arena came from set-pieces, while the fourth only consisted of a total of four played passes before Ronaldo slotted the ball in the back of the net. Having players with lighting pace such as Di Maria, Bale and the Portugal megastar, that’s all Ancelotti needed. After all, he himself confirmed it earlier this season: “I’m Italian; we don’t need 30 passes, three will do.”

And that is the way Real Madrid have been playing for most of the season. Why have 70 per cent possession if that would be futile? The counter-attacking, swift system that stressed quick transition suited them better. Now in the Champions League final, with the Copa del Rey won and mathematically still in the hunt for La Liga, their season by no means can be labelled a failure.

Under Ancelotti, the team have had their best win record in recent times, with the ex-Chelsea boss guiding his side to victory in 78.85% of the time, a better record than Mourinho’s 71.91%.

The team have come full circle, too. Sergio Ramos, long criticised for being a ticking time-bomb, assumed better responsibility in the midst of Iker Casillas’ exile in the league. That is not to say that the Sevillian will never see a red card again, but the perfect tribute for his hard work was getting his revenge on Bayern Munich by scoring two goals, after having been the laughing stock of the football two years ago as he missed that famous penalty kick at the same stage. Next to him, Pepe is back to being a defensive rock, and it is no coincidence that the pair’s great displays allowed them to stop Bayern Munich from scoring over 180 minutes.

In midfield, Modric is showing his true worth with one masterclass after another, while their attacking triumvirate of Karim Benzema, Bale and Ronaldo, “the BBC”, is now the continent’s most feared forward unit. At the heart of it of course, is Ronaldo, whose brace against Bayern Munich elevated his Champions League goal total to 16 this term, a new record.

The 2014 Champions League final in Lisbon will be an all-out Madrid affair as neighbours Real Madrid and Atletico Madrid battle it out for the prestigious prize. For Los Rojiblancos, this will be an excellent testament to Diego Simeone as the Argentine looks set to make history with the Mattress Makers. However, it will be twelve years in the making for the nine-time champions, as they hope to drop this label and be the first side to hold double digits in the competition. The time has come for Europe’s old king to get back on his throne.