Mark Lawrenson is of the view that Jurgen Klopp should start Diogo Jota with front three Mohamed Salah, Sadio Mane and Roberto Firmino in Liverpool’s Champions League return leg against Real Madrid as now it is all or nothing for the Reds.

Klopp’s side fell to a 3-1 loss against Real Madrid in the first leg of their Champions League quarter-finals clash on Tuesday night in Spain in a game that saw the visitors offering relatively little in terms of attacking threat with only one shot on target.

The return leg at Anfield is set for next Wednesday with the Reds now needing to find some form up front and it has been a topic of discussion among the Liverpool faithful how Klopp will line up his attack. 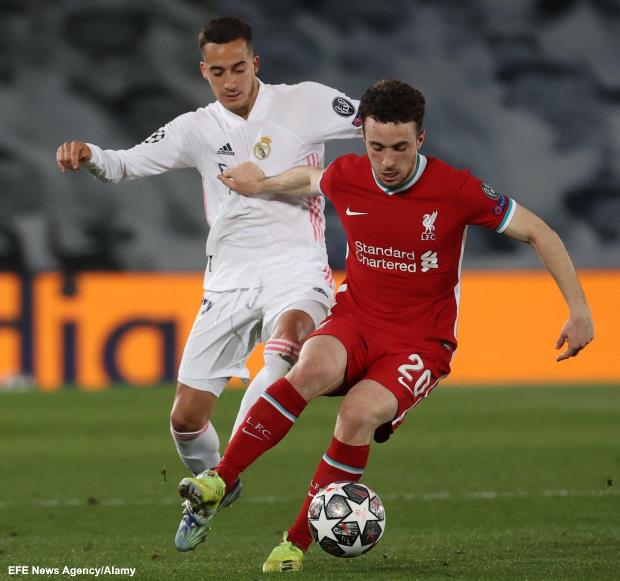 Reds legend Lawrenson feels Klopp should start in-form Jota with Liverpool’s regular front three of Mane, Salah and Firmino as it is all or nothing for the home team next Wednesday.

However, Lawrenson explained that deploying a front four could become a double-edged sword as as it could result in Real Madrid midfielders, in the likes of Luka Modric, Toni Kroos and Casemiro, having more space to exploit and punish the Reds.

Asked whether he feels Klopp should play Jota alongside Liverpool’s usual front three, Lawrenson told Off The Ball: “I think you will have to go that way in the second game because it is s**t or bust, so that is the answer to that.

“I think it is difficult because they go to Arsenal and they look really, really good.

“And obviously you are kind of thinking well one of the things with Jota is you bring him on and he causes all sorts of problems.

“It is a difficult one.

“I mean then what you do in terms of the midfield when if you have got sort of three up front and one behind, what do you do with the midfield when you look at the performances of Casemiro and as I said about [how good] Modric, Kroos [were in the first leg] because you do not want them coming to Anfield and having a little bit of space in which to pass the ball and they will pass you to death.”

Before they host Real Madrid, Liverpool will have to take care of business against Aston Villa at the weekend in the Premier League and will be determined to get a positive result to take into the continental tie.