West Ham United legend Alvin Martin has insisted that Tomas Soucek encapsulates everything that was good about David Moyes’ team in the 2020/21 season.

Moyes led the Irons to their highest Premier League points tally, a sixth place finish in the table and qualification for the Europa League group stage in the recently concluded campaign.

And at the centre of it all was Czech Republic international Soucek, who scored ten goals and provided one assist from 38 appearances in the league. 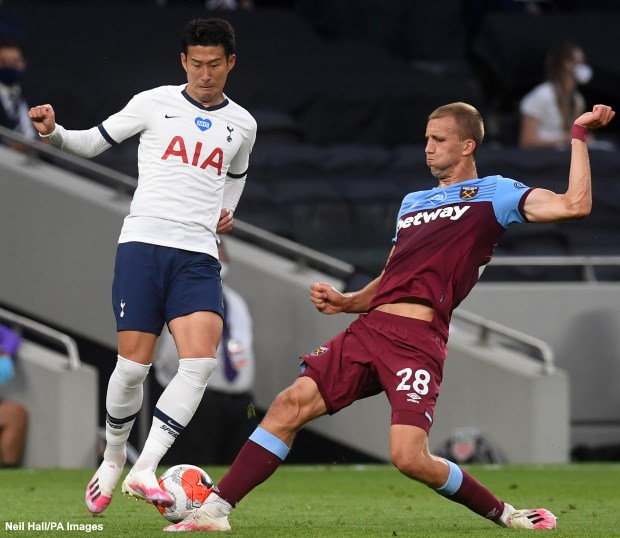 Reflecting on the midfielder’s contributions to Moyes’ squad, West Ham legend Martin explained his view that Soucek encapsulates everything that was good about the Irons in the 2020/21 season.

Martin hailed Soucek’s attitude and recalled how the player carried on playing despite suffering a nasty cut on his eye during West Ham’s game against Tottenham Hotspur in February.

The former defender, who also reserved praise for Aaron Cresswell, went on to point out how West Ham have several contenders for their player of the year award.

“Everybody who has come in has worked unbelievably hard“, Martin told West Ham TV.

“There was a moment [in the home game against Tottenham] when Soucek got the cut eye and jumped straight up, and I thought: ‘Wow, I wouldn’t mind having him in my team!’

“I think he encapsulates everything that has been good about the team this season.

“And look, there has been some outstanding performers.

“I think there are a lot of leaders in the team.

“I look at people like Aaron Cresswell, who I think has been fantastic this year.

“When you look at the Hammer of the Year – the amount of candidates who are going to be put forward for that.

“If you win Hammer of the Year this year, you have had a good season, because there have been so many outstanding individuals.”

Soucek’s performances for West Ham have seen him linked with several clubs, but Martin will be hoping that the midfielder will stay put and take the side to greater heights.