A number of Everton fans have taken to social media to express their thoughts on the possibility of the Toffees making another move to sign Donny van de Beek from Manchester United in the January transfer window.

The Merseyside-based club tried to acquire Van de Beek’s services from Manchester United in the summer transfer window, but saw the move blocked by the Red Devils.

With the winter transfer window on the horizon, Everton director of football Marcel Brands has sparked talk of the Toffees making another move for the Dutchman in January with his comments this week, leading fans to debate the prospect of signing him on social media. 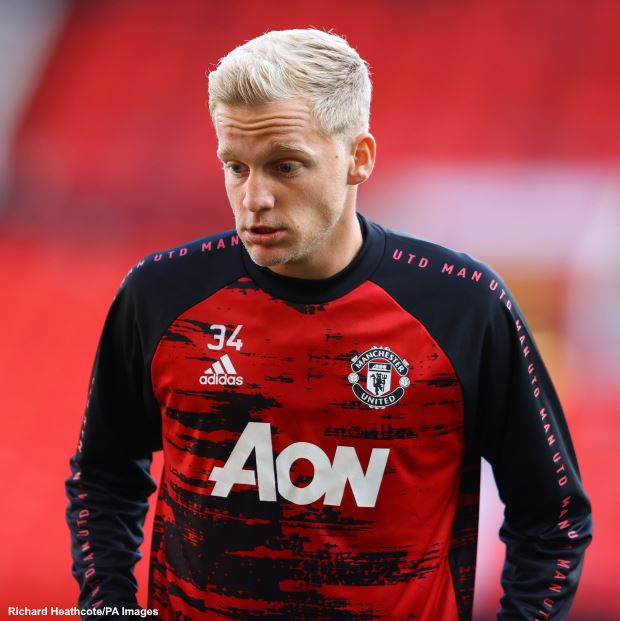 Andrew is of the view that Everton signing Van de Beek would be intriguing as he feels it will reflect the Toffees’ ambition, while the midfielder will get to played under an accomplished manager in the shape of Rafael Benitez and insisted that the transfer is worth the risk.

Addressing Van de Beek’s comparisons with former Everton star Davy Klassen, Joe explained that Klassen did not get a chance to prove his worth and played under poor managers at Goodison Park, while the Manchester United star would be working with a coach who will get the best out of him.

Cal admitted that he cannot see where Van de Beek will fit in at Everton, but feels he could have an impact similar to Jesse Lingard at West Ham last season and surprise everyone.

Not all Everton fans are convinced about signing Van de Beek though, with Philip insisting that the 24-year-old has not played much in the last two years and pointed out how Salomon Rondon is struggling at the club after having not had much action recently.

The signings of Andros Townsend and Demarai Gray did not excite many in the summer, but having seen them excel for Everton so far, Paul is prepared to trust whoever Benitez brings in whether it be Van de Beek or Newcastle United’s Sean Longstaff.

Pickfords is convinced Benitez can get the best out of anyone having seen the likes of Townsend, Gray and Abdoulaye Doucoure shine for Everton this season, but stressed the need for the players to be up for it too.

Van de Beek to Everton would be an intriguing move. Rafa would value the versatility that he brings to the table. Despite recent seasons, Everton remain an ambitious club. He’d be learning under the tutelage of an accomplished manager. It’s worth the risk for all parties.

People comparing Van de Beek to Klaassen… one, Klaassen never got the chance at Everton and two he played under two horrendous managers, where as with Van de Beek, Benitez would get the best out of him, similar to what Moyes did with Lingard

Be a good signing if it happens 👍

Remember when no one wanted lingard and then he had a huge impact at West ham out of nowhere? Could van de beek have a similar impact with us? No one can see it, or where he fits in etc but could come in and suprise everyone. Was class for ajax in the champs league.

He’s not played for two years..do we seriously want to go in for him .

It’s so far so good for Benitez at Everton so I’m more than happy for him to bring in any players he likes whether that be Van De Beek or Longstaff etc. Just let him get on with it #EFC

If we’re all honest nobody was punching the air when we signed Grey and Townsend, Dacoure is like a new signing and we’ve seen fleeting glimpses of a better Iwobi. I’m more than convinced he can the best out of a any player but the player has to be up for it as well