Liverpool legend Ray Houghton has expressed his wish to see Reds midfielder Curtis Jones taking more shots at goal, the only part of his game he feels needs attention.

Jones has been in impressive form for the Reds, starting from last season, and his impact in the team has grown this term even though he has faced injury troubles.

One area the midfield star has been deficient in though is goals, with both last season and this campaign producing a solitary goal each. 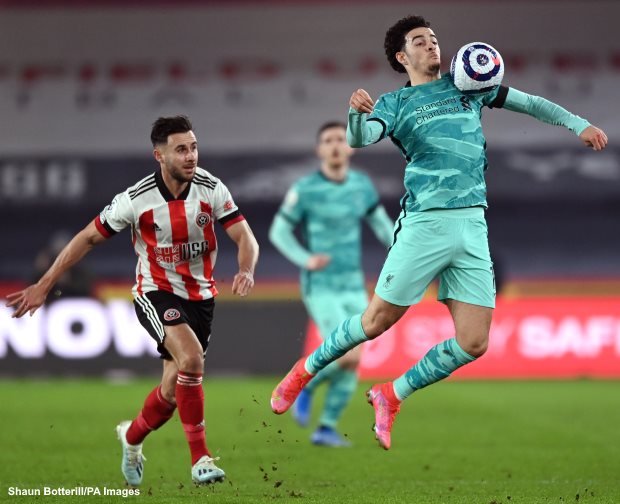 Houghton thinks that the young midfielder has marked considerable progress this season and if he continues on the current path, he will solidify his place in the Reds midfield.

Speaking on LFC TV, Houghton said: “He looks like he’s in a good place, he looks he is going to be big-part player for Liverpool for a long time to come.

“But it’s about the here-and-now, it’s about his growth as a player and he’s grown.

“From what I have seen of him from last season to where he is now, I think he is really expressing himself a lot more, getting into the right areas to affect the game and he’s making the right decisions, which is crucial if you want to be in this Liverpool midfield for a considerable period of time.”

The Reds legend thinks that while he is order in all the other areas of the game, even eclipsing Fabinho and Jordan Henderson in some, one thing that irks is his lack of end product and he would like to see the player let loose more often in front of goal.

“What he has also got is a bit of energy”, Houghton added.

“When you look at Fabinho, who sits a bit deeper, Henderson on the right hand side doesn’t quite move as well as Curtis Jones because of the ages they are at and where they are when it comes to their profession at the moment.

“[I would] just like to see him have a few more shots at goal.

“Every other part of his game is in order at the moment.”

Liverpool are the leading goalscorers in the Premier League at the moment with 55 goals and Jones will be hoping that he is among the scorers as well going forward, though it remains to be seen whether he will be more adventurous in front of goal to that end.