Celtic midfielder Matt O’Riley has confessed that he harbours hopes of one day playing for Barcelona and hopes that a good performance against their biggest rivals Real Madrid in the Champions League might put him on their radar.

The Hoops have maintained a perfect record so far this season, winning all six of their league games and also beating Ross County away from home in the Scottish League Cup.

Ange Postecoglou’s side begin their Champions League campaign by welcoming defending champions Real Madrid to Parkhead in Group F, with RB Leipzig and Shakhtar Donetsk waiting in the wings. 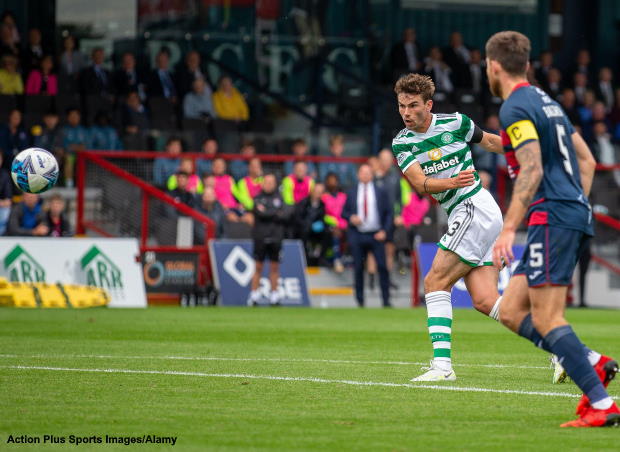 O’Riley is a self-confessed fan of Barcelona’s style of play and would have loved to cross swords with the Catalan giants in the group stage of the Champions League.

Instead, the 21-year-old has to make do with their Clasico rivals and he expressed the hope that a good performance against Los Blancos will one day land him at the Camp Nou in a Blaugrana shirt.

The midfielder has no intention of being an idle participant in the Champions League, aiming to show what he can do in the biggest club competition in Europe.

“I like FC Barcelona and their style of play, so this was an opportunity for me to go and meet them, but it didn’t happen”, O’Riley told Danish outlet Bold.

“I have a dream to play for Barcelona one day, so maybe if I play well against Real Madrid in the Champions League, then Barca will want me, but we’ll have to see.

“I want to go far in the Champions League.

“I have not come just to join but I want to show myself with Celtic.

“That’s the mentality I have.”

O’Riley has been one of Celtic’s standout performers so far this campaign, boasting five assists in six Scottish Premiership games, including a pair in the recent 4-0 triumph over rivals Rangers.