Everton boss Frank Lampard has heaped praise on midfielder Isaac Price, who he feels has put himself in frame to be in the first-team when the season resumes.

In the absence of a number of senior players, Lampard used the Australia tour to check on some of his young academy graduates, Price being one of them.

Price featured in both of Everton’s tour matches, against Celtic and Western Sydney Wanderers, and impressed Lampard with his performances. 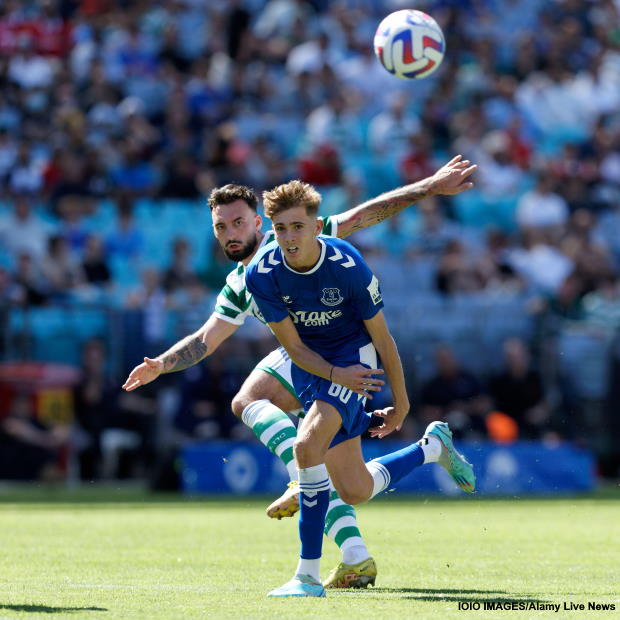 Lampard, while describing Price’s performances in Australia, insisted that the midfielder was “brilliant”.

The Everton manager further took time to talk up Price’s chances of featuring for the first-team once the season resumes following the World Cup.

“He’s been brilliant on the trip”, Lampard said in an interview with Everton TV.

“He deserved to play because he’s trained great. His energy is amazing. I think you can see that natural energy to his game.

“Isaac wins a lot of second balls and he’s calm when he gets there, and his passing.

“When I put him higher on the pitch in the last 20 minutes, he’s finding lovely little passes in great pockets, which is a bit of a natural knack.

“It’s been a real positive trip for Isaac and he puts himself now in the frame to be in the First-Team squad when the games start.”

The Everton boss stressed that Price did what he wants to see young players do, which is to grab his opportunity.

“You know, we’ve got a couple of injuries so that’s what young players have to do.

“When they sniff a chance, they have to take it and he’s taken it this trip.”

Everton, currently placed just above the relegation zone, will resume their campaign with a match against Wolverhampton Wanderers on Boxing Day.