Manchester City view Manchester United and Chelsea target Declan Rice as the long-term successor to Fernandinho and are likely to make a move for him next summer, according to The Athletic.

Rice has been one of the most important players at West Ham over the last few years and is the lynchpin of David Moyes’ side.

He has a contract until 2024 and West Ham’s high demands became a deterrent when clubs such as Manchester United and Chelsea wanted him last summer. 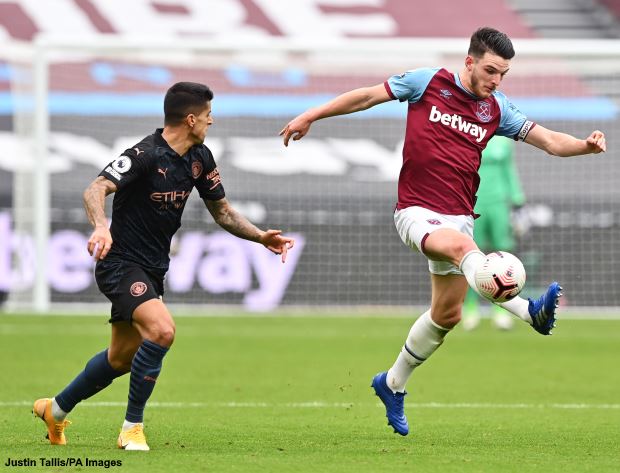 Rice was reportedly disappointed at West Ham’s high valuation of him and has already rejected multiple offers of a new deal from the Hammers.

Manchester City are also interested in him and are claimed to have earmarked him as the long-term replacement for Fernandinho.

The Brazilian signed a one-year extension to his contract in the summer and will stay at the club until at least the end of the season.

But the Premier League champions want a player for his position next summer and Rice is their top target.

However, interest from Chelsea and Manchester United means there is likely to be intense competition for his signature.

West Ham are tipped to accept that Rice will eventually move on but are likely to demand a fee of £100m for his departure.