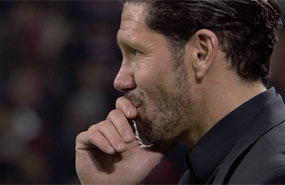 Until a few years ago there were two jokes doing the rounds in Spanish football. One was La Liga itself, dominated as it was by two giants, Barcelona and Real Madrid, whose financial power meant none could come near them. The other was Atletico Madrid, a team who seemed to spend their time finding new and hilarious ways to make themselves a laughing stock. Thanks to Diego Simeone, no one is laughing any more at either joke.

Atletico Madrid stand on the brink of one of the most remarkable feats of modern football. Their Argentine coach, who has (with some justification) previously described winning the title in Spain as “impossible” due to the sheer financial disparity with Barcelona and Real Madrid, has somehow managed to steer his side to within two victories of the Spanish title and one more win after that could secure them a first ever Champions League.

Comparisons have been made with Liverpool’s performances in the Premier League this season. The five-times European champions themselves have stayed in the title race until the very end, despite having been tipped by few to even finish in the top four of the league this season. Their remarkable feats are impressive enough, but even the playing field they face isn’t as skewed as the one that Atletico Madrid have to cope with.

Their budget is roughly a fifth of their big two rivals. Barcelona and Real Madrid are not just the two biggest money making machines in Spain, but the world. They continually land the most coveted players in world football, building on success by weakening their rivals, and aided by the ability to negotiate individual television rights deals which means their income from this revenue stream dwarfs that of all other teams in the world game. To put some numbers on it, Atletico Madrid’s budget is around €120m, whilst Barcelona and Real Madrid’s are closer to €500m. Atletico Madrid pay their players a reported total of around €66m. That places them between Hamburg and Sevilla in the rankings of what football clubs pay their players. For added perspective, Atletico Madrid’s average salary per player is just marginally larger than the likes of Fulham, Sunderland and Bolton Wanderers, and well under the amount Werder Bremen, Valencia and Aston Villa’s stars earn.

Then consider the win over Chelsea in the Champions League. In some quarters Simeone has been touted as the new Jose Mourinho. Yet Atletico Madrid’s performance at Stamford Bridge was relentlessly positive, whilst retaining their defensive discipline. And in stark contrast to the way in which Chelsea and Mourinho like to spend, Atletico Madrid’s first team in London did not contain a single player bought since Simeone took charge two and a half years ago. It cost a total of £39m – the player scoring Chelsea’s goal cost more than that alone, and he has barely produced anything approaching a return on that investment since.

Atletico Madrid’s success is a fantastic thing for the sport in a day where money seems to rule. It restores some faith in the romantic notion that anyone can come and have a go if they really believe and take on the biggest names.

Football analysts insist that there is a clear correlation between player wages and success. That may well be true, but it is the exceptions to that rule which make football what it is. For all the spending of Manchester City or Chelsea, Barcelona or Real Madrid, or in Germany Bayern Munich, it is when teams like Liverpool, Atletico Madrid and Borussia Dortmund come to rule that football proves its worth as a sport. Atletico Madrid highlight the best of the sport. All logic suggests that not only should Barcelona and Real Madrid dominate as they have done in recent years, but that no team should ever have been able to touch them for years to come.

And Atletico Madrid have done so against seemingly impossible odds. Having lost Sergio Aguero, and replaced him with Radamel Falcao, and then had to replace him with Diego Costa, Los Rojiblancos seem set to lose their talisman for the third season in a row. Yet they continue to improve. It isn’t a mystery how they continue to defy the odds. Simeone has constructed a team, not a set of individuals, and has a gift, like Brendan Rodgers, that not all managers have; the ability to extract the maximum possible from his players and make them into a whole greater than the sum of its parts. Contrast that with how the celebrated Mourinho can’t even manage to get the best out of a £50m striker, another with two Champions League titles and a host of the top honours in the game to his name and one who has scored for fun with every other Premier League club he has played for. Football would be incredibly dull if it were just about gathering the best players on the biggest wages and waiting for them to steamroller the opposition.

While Atletico Madrid are certainly defensively solid, and lack the counter attacking flair of Real Madrid or the whirlwind pass and move football of Barcelona, they have an immense will to win and a ferocious appetite for hard work. Allied to the skill and cunning of Koke and Gabi in central midfield, the trickery out wide of Arda Turan and the relentless Costa, they burst forward with energy, dynamism and intelligence. And they aren’t actually that defensive – much like Rafael Benitez’s teams, they look to attack with control and to ensure that they don’t leave gaps in defence. But if they can attack, they will. They have won 7-0 and on two occasions 5-0 in La Liga; beaten AC Milan 4-1 in the Champions League and their second leg against Barcelona was breathtaking. They had the masters of tiki-taka on the ropes for 20 minutes, forcing back the Catalans with their ferocious pressing game and then cutting them apart with intricate passing. And they have now just beaten a Mourinho-coached Chelsea boasting six defenders in their starting eleven by the biggest scoreline the Portuguese has ever suffered at home. Their way isn’t so much to bludgeon the ball into the back of the net and then sit back – when they go forward they are a joy to watch. They aren’t the quickest, or the slickest, or even particularly powerful, but wonderfully intelligent and ferociously determined. Atletico Madrid’s energy and solidity provide the platform on which they create.

They now find themselves on the brink of surely the most remarkable achievement of modern times. To win La Liga would be incredible enough. To claim the Champions League too, for a team who two and a half years ago were mired in a relegation battle, would be in its own way up there with the trebles of Barcelona, Bayern Munich, Manchester United and Ajax, or the unbeaten seasons of Arsenal and AC Milan. There’s a long way to go still, but the thing about Atletico Madrid is that where most would crumble under such pressure, they will surely thrive. That is the Simeone effect.