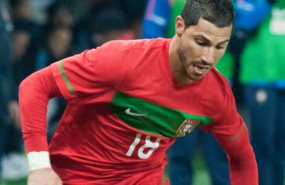 Experienced Portuguese winger Ricardo Quaresma returned to his homeland last month to play for FC Porto once again, in a desperate attempt to relaunch his stalled career. At the age of 30, Quaresma, who was once considered one of the most talented wingers Portuguese football had ever seen, has experienced numerous difficulties abroad since leaving Porto in 2008. The Portuguese “Harry Potter” as he was often named, could not spread his magic away from Portugal and even his famous trivela (a wickedly curled shot) did not help.

Quaresma is a product of Sporting Lisbon’s academy, by far the most impressive development factory for young players in Portugal. He was quickly granted a place in the side’s senior team and, by the hand of Romanian legend Laszlo Boloni, made his debut in 2001 and quickly became one of the most important players in the team. Technically gifted, the fledgling winger instantly began to attract attention from a number of clubs and there was little surprise when Barcelona snapped him up for £5m and the season-long loan of Brazilian midfielder Fabio Rochemback.

Quaresma did not live up to expectations at the Camp Nou though, the move coming too soon, with the hype too great, and just one year later was back in Portugal, this time at Porto. His move to the Dragons caused mayhem in Portugal at the time, as no one expected that he would quickly return to his native country, or let alone play for one of Sporting Lisbon’s biggest rivals.

Despite the controversy surrounding his transfer, Quaresma’s first stint at Porto provided the most remarkable moments of his career so far. The Portuguese winger’s impact on the team was immediate. He scored the winning goal that handed Porto the Portuguese Super Cup in 2004 against rivals Benfica, something which made him an instant hero to the club’s fans. The winger played in more than 100 games for the current Portuguese champions and, apart from occasional run-in with then-coach Co Adriaanse, a renowned disciplinarian, who at that time accused Quaresma of being selfish and lazy, the flamboyant winger enjoyed a fantastic spell at Porto.

In 2008, Quaresma left the Portuguese giants to embark on another adventure abroad. He joined Inter Milan, but the new experience turned out to be a disappointment once again. After just one year with the Italian team, he went on loan to Chelsea, something that failed to resurrect his career.

With bags full of disappointments and unsuccessful experiences, in 2010 Quaresma tried to turn over a new leaf, this time at Turkish giants Besiktas. He was greeted by hysterical Besiktas supporters when he landed in Istanbul and ended up clocking up a very positive first season at the club. But luck soon deserted the winger once again after a run-in with Portuguese head coach Carlos Carvalhal, which resulted in him being suspended from all the club’s activities. Quaresma followed this up by heading to the Middle East to join Al Ahli in Dubai on a big-money deal. The dream though did not work out and a complicated knee injury resulted in him being released from the club. It seemed as if he was destined never to hit the heights predicted.

With his career at risk, Quaresma returned to Portugal in December to sign a contract with the team at which he enjoyed his golden years: FC Porto. To the delight of Porto’s supporters, Quaresma was back and he was duly the centre of attention in the team’s first training sessions of 2014, which saw several thousand fans head to the Estadio do Dragao to salute him.

Quaresma made his “second debut” against Porto’s fierce rivals Benfica on 12th January as a second-half substitute. He managed to make an impact, shaking things up, but the Dragons ended up on the losing side, going down 2-0 in Lisbon. Quaresma did not have to wait long for his first win though, or his first goal, with that coming the following Wednesday in a 4-0 League Cup win over Penafiel.

The winger’s second stint at Porto is likely to be a defining moment in his career and for his aspirations of being part of the Portugal squad to head to this summer’s World Cup. Quaresma was often compared to Cristiano Ronaldo during the early years of his career and now has another chance to prove all those who have doubted him wrong, and in his own backyard too. In order to do that, he will have every help, at a team that have always supported and respected him.