Dundee United midfielder Jeando Fuchs has revealed that have been contacts with Celtic, Rangers and Blackpool, amongst other clubs, but he is not worrying about his future just yet as he plots his next move carefully.

Fuchs made the switch to Dundee United in the summer of 2020 after ending a disappointing spell at Spanish club Alaves, during which time he had a forgettable loan stint in Israel at Maccabi Haifa.

The Cameroon international penned a two-year deal with Dundee United and has caught the eye this season already with his performances in the Scottish Premiership. 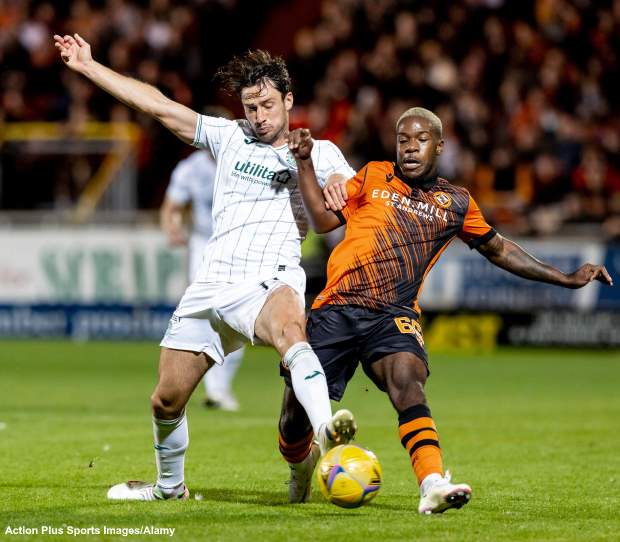 Following two moves which did not work out, Fuchs is determined to make sure he does not rush into any decisions above his future and is enjoying Dundee United’s solid season.

He told French outlet Foot Mercato: “I am at the end of my contract in May. I’m waiting to see something concrete and see if I have a choice to make at that time. I am not in a hurry.

“We are in a good position, we are having a good season. I don’t want to jump into another quagmire and regret it again afterwards.”

Fuchs though is poised to be a man in demand and revealed that German side Stuttgart asked about him in the summer, while there has been contact from Celtic and Rangers, along with Blackpool, Wigan and Peterborough, and an unnamed Premier League side.

“There have been contacts with Blackpool, Peterborough and Wigan.

“Stuttgart asked for information from the summer.

“Celtic and Rangers have made contact as well, but nothing more.

“A Premier League club as well.

“England would be good.”

The 24-year-old midfielder, who started his senior career at Sochaux, is not opposed however to heading back to his native France next summer if he receives a good proposal.

Fuchs added: “There is interest [from France], but not really concrete contacts.

“I don’t really think people in France are watching Scotland.

“But I am not against the idea of going home.

“It all depends on the project.”

If he does not pen a fresh contract at Dundee United then Fuchs will be able to sign a pre-contractual agreement with a non-Scottish club as soon as January.

And as a free agent next summer, the Cameroon international is sure to be in demand.