Everton loanee Jarrad Branthwaite has zeroed in on the key difference between the Premier League and the Eredivisie, noting that every team in the Dutch top flight puts added emphasis on playing out from the back.

Branthwaite is currently on loan at PSV Eindhoven until next summer, but was unable to prevent them crashing out of the Champions League via defeat at home to Rangers after making his debut in the qualifying rounds.

The 20-year-old scored his first Eredivisie goal in the 4-3 win over Feyenoord at the Philips Stadion before the recent international break. 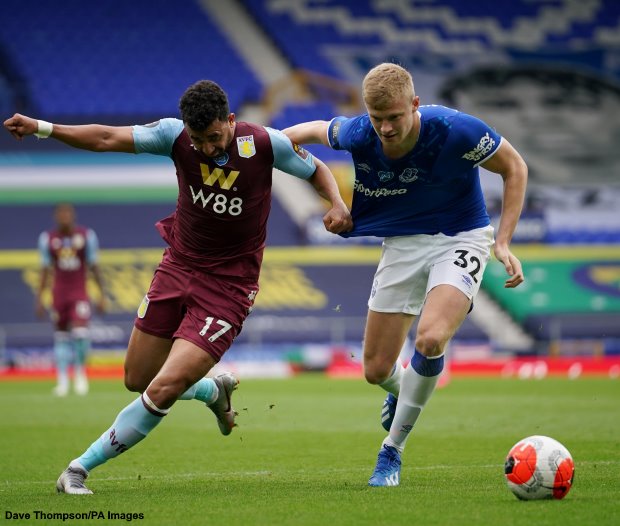 Branthwaite stressed that every team in the Eredivisie look to play out from the back, while there are a few outliers in the Premier League who still do not live by that philosophy.

The defender also pointed out that while he was not new to the style of play due to his association with Everton, he is still getting used to some aspects, such as playing on the right side though left-footed and keeping the ball moving quickly.

“We focus a lot more on playing from the back”, Branthwaite said to The Athletic.

“The Premier League is like that now, but not every team tries to do it. Over here, every team does. That’s the difference in the style of play.

“It’s nothing new, as we used to try to do that at Everton.

“That’s probably one of the reasons I was sent here.

“I’m enjoying it. I’ve been playing on the right side. Which is a bit different, being left-footed.

“It’s just about learning when to step out with the ball and when to play quicker.

“They want to keep moving the ball quickly here.

“One of the coaches told me to keep doing that as it’ll help in the future in the Premier League.”

Branthwaite has six appearances to his name so far in all competitions for PSV, scoring once, and will look to break into the Everton first team upon his return.